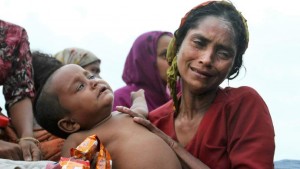 Who are the Rohingya?

The Rohingya, a Muslim ethnic group of roughly 800 000, claim to have lived in Myanmar for generations. Despite this, they are not recognised by the Myanmar government as an official ethnicity, being seen as illegal Bangladeshi immigrants, and have been denied citizenship since 1982, leaving the Rohingya stateless.

Their plight has significantly increased since riots and violence against them rose in the Rakhine state in 2012, and is yet to be resolved, being labelled the most persecuted minority in the world by many human rights groups.

The Lives of Rohingya People

Currently, many Rohingya live in camps for internally displaced people.

Here, their rights are heavily restricted, as they require permission to marry.  Unemployment is high, and they must rely on aid from the World Food Programme to eat.

Health and education services are also inadequate. Although the schools in the camps are free, there is not enough money to pay all the teachers, requiring many to volunteer.

Rohingya in the camp told Al Jazeera that doctors are being negligent, and refusing to see them or take their claims seriously.

Rohingya as illegal immigrants in Myanmar

For those that live outside the camps in Sittwe, usually in ghettos, they face the threat of the 969 movement, a main instigator in the recent violence against the Rohingya, which started after Rohingya men were accused of raping a Burmese woman.

Ashin Wirathu is a Buddhist monk who is the leader of the 969 movement, and, as Al Jazeera reports, titles himself the “Burmese Bin Laden”. Sympathisers of the 969 movement view the Rohingya as illegal immigrants in Myanmar, aiming to establish a Muslim state by 2100.

Naturally, many Rohingya have fled, either from the camps that do not provide for their daily needs, or from violence from extremist Buddhists.

Furthermore, many of them are turning to people smugglers to escape Myanmar after having waited more than 5 years for the UN to assess their refugee claims and resettle them. Recently, a truck crossing through Thailand was found to have 98 Rohingya inside, mostly under 18, with one woman having died of suffocation.

On 05 January the ABC News reported that 53 Rohingya had been apprehended in Thailand as they were about to embark by boat to Malaysia, which is a majority Muslim country.

Crossing through Thailand is another danger Rohingya face, as people apprehended are often held in overcrowded facilities. They may also fall victim to people-trafficking, as reported by Reuters.

This trafficking is reportedly conducted through the Thai army, with many being held in cells until family can pay for their release.

For those unable to deliver the ransom, some are sold as manual labour to farms and shipping companies, or die of starvation and disease. Some are pushed back out to sea upon entering Thai waters, somewhat similar to conditions for refugees attempting to enter Australia by boat, leaving them in dire straits.

The worst effects of statelessness can be seen to be experienced by the Rohingya people, and the international community will have failed them if action is not taken soon to remedy the problem.