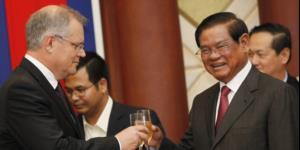 Australia’s agreement with Cambodia to resettle refugees there

On 26 September 2014, the Australian government announced that they had entered into an agreement with Cambodia to resettle refugees there.

The agreement is incredibly controversial, not only for political reasons, but also because of many human rights concerns.

When the Gillard government announced it had entered into a similar arrangement with Malaysia, the opposition at the time, now in government, had strongly opposed and criticised it, as had many refugee advocates. This deal with Cambodia thus appears to be somewhat hypocritical of the government, in light of its stance against such programs when in opposition.

However, this problem has been somewhat sidelined by the many human rights concerns refugee advocates raise regarding this agreement with Cambodia.

Former Chief Justice of the Family Court of Australia, the Hon. Alistair Nicholson, has described the deal as “inappropriate, immoral, and likely illegal”

He claims that it is irresponsible as Cambodia’s welfare sector is already overstretched and Cambodia does rely significantly on international aid to support its own population, particularly the many children in need of shelter and care.

In addition to this, Cambodia has extremely high levels of corruption, which puts into question the likelihood of aid being distributed fairly, or even at all.

Whether it is illegal depends on whether the agreement would be a breach of the non-refoulement principle, a key part of the Refugee Convention, to which Australia is a signatory.

The non-refoulement principle requires that refugees are not sent to places where they are likely to face torture, cruel or inhumane punishment, or where life and liberty are at stake.

Considering the dire state of Cambodia’s own vulnerable citizens, it seems unlikely that asylum seekers would be a priority to receive help.

The Memorandum of Understanding between Australia and Cambodia on this arrangement contains a statement of support to allow asylum seekers to become self-sufficient.

However, this statement is vague, and therefore provides insufficient certainty as to the safety of these individuals. This itself is not a breach of non-refoulement but if the poverty the asylum seekers face is so bad that they are forced to return to a hostile home country, that would be a breach.

It would also be a breach if poverty forced the asylum seekers to the streets, as Cambodian authorities, without due process, regularly detain children and the homeless into “correction centres”.

Even more concerning, Cambodia infamously struck a deal with China to return twenty Uighur refugees, despite Cambodia being a signatory to the Refugee Convention, meaning that the deal would be in breach of non-refoulement.

Agreement between Australia and Cambodia into significant doubt

Can Cambodia really be trusted not to breach the Refugee Convention again and send back refugees sent to them from Australia to countries where they are likely to face torture?

In light of recent events, it would appear this is not a concern for Australia, which has likely breached the non-refoulement principle already by sending back Tamil refugees to Sri Lanka, where they have been reportedly tortured and raped.

Although the agreement stipulates that asylum seekers would voluntarily choose to go to Cambodia, the conditions of detention in Nauru and Manus Island are unlikely to leave many asylum seekers with a real choice.

It would appear that unless Cambodia can promise not to breach the non-refoulement principles and commit to aiding asylum seekers, this new agreement would only result in worse outcomes for refugees who seek asylum in Australia.