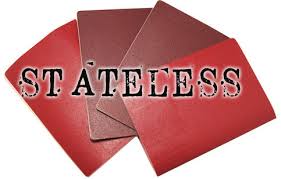 The Convention relating to the Status of Stateless Persons terms “Stateless Person” as a ‘person who is not considered as a national by any State under the operation of its law.’

This situation can often take effect relating to many asylum seekers and refugees fleeing their country for fear of persecution or ongoing violence and breach of basic human rights.

555 people in closed detention in Australia identified as being stateless

The Australian Human Rights Commission(AHRC) found that as of “15 May 2012, there were 555 people in closed detention in Australia who identified as being stateless, 114 of whom had been detained for over 540 days”.

Australia does have obligations regarding stateless individual(s) pursuant to the Convention Relating to the Status of Stateless Persons and the Convention on the Reduction of Statelessness. There are guidelines for assessing claims of statelessness, however this is unfortunately not enough to produce an efficient remedy.

Therefore, the global distribution of asylum seekers and refugees exemplifies what the authors of An Introduction to International Relations call the “dilemma that the world is currently facing” and in turn a third category of people has been created: stateless persons.  This fact produces several questions surrounding statelessness and stateless persons.

In its Community Arrangements For Asylum Seekers, Refugees and Stateless Persons, the Australian Human Rights Commission (AHRC) highlights the benefits of community placement. The effect of statelessness stresses the position of these people in legal limbo. The AHRC has recommended that there should be a development of formal recognition of statelessness. The rights of stateless persons should also include ways to grant them substantive visas. Thus, the AHRC provides numerous recommendations to rectify issues surrounding asylum seekers, refugees and stateless persons.

This case highlights a situation in which a person can be caught in legal limbo. Ahmad came to Australia via plane from Saudi Arabia, where he left due to a life of constant discrimination.

A legal technicality meant the Australian government refused to grant him a protection visa.  As a result, he was immediately detained in Villawood Detention Centre and now faces deportation to Chad (despite the fact he has never been there) merely as a result of his Chadian parentage. This deportation will render Ahmad virtually stateless.

If deported to Chad (and this is very likely), Ahmad will have no support network or means of establishing one especially that he can hardly speak Ratana, the language of  the extremely marginal desert tribe, one of 200 languages spoken in Chad.

Additionally, the human rights record of the Chadian military is negligible, with Amnesty International reporting that most violations go unchallenged, and around 90,000 people are currently internally displaced.

“I am exactly like the Bidouns of Kuwait,” Ahmad stated. “They tell me I’ll get used to it [Chad]. I tell them it’s impossible. I’d rather stay here, die here or get sent to any island than go to Chad.”

Click on the links below for further stories on Australians who are now stateless:

‘Deported Drug Offender Stateless in Serbia’ – Sascha Stevanovic, who came to Australia as a two year old, is living in Serbia with no way of supporting himself, after he was deported from Australia following a lengthy period in prison on drug offences.

‘Australia to deport German-born criminal’ – The federal government defended its decision to deport a German-born Australian resident because of his lengthy and serious criminal record.

‘Stateless Man Fails to Plead his Case’ –  Despite living in Australia most of his life, Mr Robert Jovicic, 42, was deported to Serbia in June 2004 after committing a string of crimes linked to his heroin addiction.