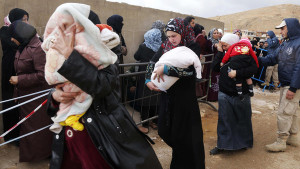 Refugee exploitation is not limited to the actions of people smugglers, and often continues once these refugees have arrived at their destination. Many refugees (predominantly female) suffer sexual abuse at the hands of employers, landlords and even aid distributors in some cases.

Al Jazeera reported one instance of a woman who was asked not only to provide sexual favours to her employer, but to also seek out other Syrian girls in the area who would do the same for him and his friends.

In addition to such sexual abuse, many women are also forced into early marriages or prostitution. Some women do this voluntarily, engaging in what some have termed ‘survival sex’, as they would otherwise not have access to food or shelter.

An additional concern for these women is the need to provide for those within their care. In 2013, of the 205 Syrian women arrested in Lebanon for prostitution, the majority stated that they were engaging in such conduct for the sake of their children.

In other cases, young women are sold into these arrangements by their parents. In these cases, those sold often agree to the transaction due to their sense of obligation to their family. Such a sense of obligation can be considered a potentially destructive aspect of cultures that place significant value on family and familial duties, particularly when one considers that those being sold are often too young to develop their own views on that matter. In many cases, the girls sold are as young as 14.

Yet we cannot throw a blanket of condemnation over those parents who force their children into early marriages. Though it may appear disgraceful for a parent to sell their child in order to survive, many have done so out of a genuine belief that this is in the best interests of their child.

Al Aribiya reports that one woman encouraged her daughter to marry, out of a belief her new husband would protect her from abuse from others (such as an employer demanding sexual favours). However, as that report recognised, more often than not such marriages become abusive themselves.

What is truly disturbing is not only how widespread this practice is, but the blatant way in which these practices are promoted.

For instance, forced marriages were advertised on Facebook, as seen from the page ‘Syrian Refugees for Marriage’. Whilst this page was taken down in May 2014, its existence reflects a complete absence of shame on the part of those who spearhead such transactions.

This is just one of the many issues that relates to the refugees of the Syrian Civil War. Ideally, nations that house refugees would take greater efforts to ensure that such vulnerable people are provided with the support necessary to ensure their safety throughout their resettlement. If these minimum standards of support are not achieved, this issue will continue to worsen.