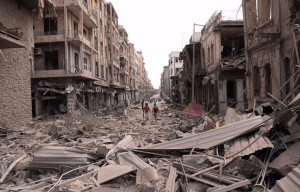 Syria, a nation in the Middle East with a landmass smaller than the state of Victoria, has become the site for one of the greatest humanitarian crises of the 21st century.

Since 2011, the country has been in a state of civil war between the al-Assad government and various rebel groups. In order to escape the violence, nearly 4 million people have fled Syria.

This represents a significant portion of Syria’s total population, which only numbers at approximately 23 million.

On 6 March 2011, in the southern city of Deraa, a group of teenagers graffitied anti-government slogans on a school wall. As a result, the teenagers were arrested and subsequently tortured.

Following this, demonstrators took to the streets to protest the cruel and inhumane treatment of the school children. Security forces responded by opening fire on the demonstrators, killing several of them. This sparked the eruption of pro-democracy protests among those who had already expressed discontent with President al-Assad’s ruling of Syria due to the failure of his long-promised economic and political reforms.

By July 2011, hundreds of thousands of Syrians were demanding the resignation of President Assad.

As the government continued to respond to these protests with brute force, the protesters began to use violence in order to defend themselves. This later escalated into the use of arms and weapons against security forces to keep them from entering their neighbourhoods and homes.

As the violence increased, Syria descended into a full civil war and by 2012 the fighting had reached the capital city Damascus.

At its outset, the conflict was predominantly a clash between those who supported President Assad, and those who demanded his immediate resignation. However, as the conflict has escalated, so too has the complexity over who is involved.

There is no clear single entity that represents the government’s opposition. Instead, there are currently 1,000 different opposition rebel groups and political parties containing over 100,000 fighters. What’s more, one cannot liken these factions by a shared desire to bring democracy to Syria.

For instance, the opposition includes extremist groups such as Islamic State of Iraq and ash-Sham (ISIS). Clearly this group, which is actuated by the desire to create a transnational Islamic Caliphate in which sharia is brutally enforced, has no concern for democratic values such as free and fair elections, the active participation of ordinary people, the protection of human rights and the existence of the rule of law. This makes opposition towards the Assad government quite problematic, particularly for external actors, given that any loss of authority by Assad is a potential gain for these extremist groups.

As mentioned at the beginning of this article, this war has led to one of the largest mass movements of people in recent history. Due to the devastating effects of the conflict, many Syrian civilians have been forced to leave their homes to seek safety in other countries.

Every day since the civil war began, thousands of Syrians take the dangerous journey across the borders to the neighbouring countries of Jordan, Lebanon, Turkey and Iraq. With nearly 4 million refugees estimated to have fled Syria, and another 6 million (50% of them being children) having relocated within Syria, this is surely one of the great refugee crises of the modern era.

Sadly it does not appear as if the fighting will end any time soon; indeed, it seems to be escalating. In February 2015, the BBC stated that the death toll had increased to 200,000, with ‘no end in sight’ for the war.

In 2013 the US and the UK stopped sending all ‘non lethal supplies’ to the rebel groups as they felt that potentially volatile groups (such as ISIS) would intercept these supplies. Many countries around the world are continuing to supply aid and are in ongoing discussions to attempt to find a peaceful solution to the conflict.