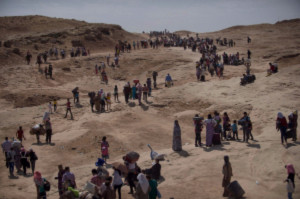 This month’s newsletter addresses the issue of the ‘Syrian Refugee Crisis’. Since the Syrian Civil War began in March 2011, nearly 11 million Syrians have been displaced. Of these, 3.8 million have been made refugees.

These people are fleeing from the relentless violence that pervades their native land, as conflict between the government of President Bashar al-Asad and the multitude of opposition groups continues to intensify.

Such conflict is characterised by severe human rights violations, including the use of torture, the rape of non-combatants and the use of chemical weapons. What is most concerning is that these violations are most routinely committed by the Asad government, leading one to consider whether such violations amount to acts of state terrorism.