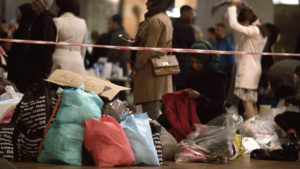 Definition of refugees and asylum seekers

Under Article 1(2) of the 1951 Refugee Convention, a refugee is someone who has crossed an international border and cannot return to their homeland due to a fear of persecution based on his or her race, religion, nationality, membership of a particular social group, or political opinion. In contrast, an asylum seeker is someone who is seeking international protection but whose refugee status has yet to be determined.

The 1951 Refugee Convention outlines state obligations towards refugees and asylum seekers, but their rights are still overlooked and violated by many states, including Australia. This is often due to concerns about national security. In the Australian context, border protection initiatives and stringent immigration policies resulted in ‘stop the boats’ political rhetoric. The two major political parties have taken a bipartisan approach to this issue, and as a result, people who have fled human rights abuses in their home country are faced with a further violations when they attempt to come to Australia.

The Syrian crisis illustrates how and why people become refugees. Syrian refugees are fleeing their homeland because of the ongoing instability and violence perpetrated by the so-called Islamic State and other rebel groups. Approximately 30,000 Syrians have recently fled camps that were set up for internally displaced people in northern Syria.

Despite the various atrocities and humanitarian crises around the world, stable, wealthy states continue to grapple with the question of how many refugees and asylum seekers they should allow across their borders. Australia prides itself on supporting human rights, but its intake of refugees and asylum seekers is low. In 2014-2015, the Australian government indicated that 13,750 places were available in the Humanitarian Program. The current Syrian crisis has displaced approximately 13.5 million people in Syria. 4.5 million of those are refugees outside of Syria’s borders.

Unfortunately, there is growing support for immigration restrictions that would exclude individuals on the basis of their religious affiliation. Tightening Australia’s borders on the basis of the fear campaign surrounding Muslims contravenes the fundamental human right to seek asylum. Furthermore, Article 18 of the UDHR asserts that ‘everyone has the right to freedom of thought, conscience, and religion.’

The Convention Relating to the Status of Stateless Persons defines a stateless person as someone ‘who is not considered as a national by any state under the operation of its law’ [1]. For example, persecuted minorities do not always have legal status as citizens in their state of origin. If they leave the country to escape violence or an unstable government, they can be locked in a legal limbo where neither their state of origin nor the state in which they have sought asylum accept responsibility for them.

What can Australia do to align itself with its international obligations?

Australia must implement positive policies that adhere to international norms. Furthermore, xenophobic and Islamophobic rhetoric needs to be stopped in order to achieve just and fair outcomes for refugees and asylum seekers. Australia prides itself of being the land of the fair go, but this is undermined by stringent border protections that limit the number of refugees and asylum seekers who are accepted. Policy must be developed with an understanding of international human rights law to promote and sustain a better future for everyone.